The Witch's House Wiki
Register
Don't have an account?
Sign In
Advertisement
in: Other Media, The Diary of Ellen, Books

The Witch's House: The Diary of Ellen

The Diary of Ellen is an anecdote released on November 2nd, 2013 written by Fummy, detailing the life of Ellen prior to the original game's setting. The novella covers the context of her home and the history behind her witch powers leading up to her encounter with Viola.

A frail (and possibly self-mutilated) Ellen lies on the cold floor of her dark bedroom, familiarizing herself with her surroundings. She hears a powerful wind blow in through her window, and the sound of pages of a diary on her desk flipping. Ellen recognizes the latter being her own diary, in which everything about her was written. She states that although she has never written anything in it herself, she knew every word that was said in that diary.

With the contents of the red-bound book still fresh in her mind, Ellen begins to tell her tale to the reader.

The chapter begins with a sickly, bandaged up Ellen looking out her bedroom window and watching a black cat catch a mouse before vanishing into the dark back alley. She is entranced by its beauty, graceful movements and, above all, its freedom. Her mother comes in the midst of her daydream to clean her wounds and change her bandages. Her mother then proceeds to comb her hair and apologizes for not letting her play outside. This prompts Ellen to reminisce on her present situation.

She reveals to the reader that she was born sickly, with the skin on her face and legs being inflamed. The inflammation also affected her joints, which made it difficult for her to move. No one knew the cause of this illness, much less how to cure it. There were also no decent doctors around, nor could her family afford one. She recalls the words of a fortune teller telling her mother: "This girl’s sickness is to be blamed on the wrongdoing of her ancestors. She will suffer for eternity."  For most of Ellen's childhood, her mother had assisted Ellen in changing her bandages and giving her medicine. Despite this, in Ellen's eyes, her mother saw her daughter as a problematic child. Fearing the possibility of being abandoned, Ellen attempted to resolve this by confining herself inside her bedroom and having good behavior. As a result, her mother displayed a kinder behavior.

Ellen breaks away from her train of thoughts as her mother cradles her in her arms. Their moment of togetherness, however, does not last very long as Ellen's alcoholic father comes home looking infuriated. He and his wife discuss his poor working conditions and how he would be forced to take another loan. Without even casting a single glance at his daughter, he takes his wife by the hand and brings her into another room. Meanwhile, Ellen plays with the purple doll her mother bought her as a gift when all of a sudden, in her innocent eyes, it begins speaking to her. The doll taunts Ellen by telling her that she herself is a mere doll, allowing her parents to do as they like to her. While Ellen denies it at first, the doll proceeds to mock her further. Overcome with unease, she throws the doll and hides under her covers, eventually drifting into sleep.

Ellen awakes in the middle of the night with her mother sitting at her bedside. As she brings her medicine, Ellen cannot help but take notice of her mother's beautiful and healthy features. In spite of her efforts to push any bitter thoughts away, she subconsciously begins to develop feelings of jealousy and hatred towards the lovable woman.

After Ellen's supposed death, hunters and knights stopped approaching her home to hunt her. Ellen continued to live though her condition continued to worsen as the crow could no longer slow her illness down any slower than he already has at this point. Deciding to relax on her bed, Ellen surveyed the area to find a man with a strange weapon kill a bird. Calling forth murderous rabbits to eat the man, they presented to Ellen the gun the man used intrigued with it's design. The house and grown fat, Ellen no longer able to move the cat comes forth with very welcoming news. He is now ready to give Ellen the spell to cure her illness.

Chapter 4: A Girl Who Was Loved 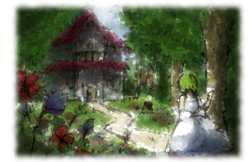 The chapter begins with another diary entry from the game, however focuses on Viola's point of view. Encountering the cat, she is lead to Ellen's house despite being warned not to venture deep into the forest. When meeting Ellen, she is told that she is "sick" and Viola decided to spend time with Ellen. When leaving the house, Viola questions if the house was there or not. While deep in thought wondering Ellen's origins, a dog barking returned Viola to her senses just in time for Viola to greet her father and have dinner.

The epilogue is in Viola’s point of view, right after she was tricked into drinking the throat-burning medicine. Ellen left Viola in her mutilated body, fleeing the house.

With the body, she received memories of Ellen’s childhood; all about her life in the slums, her bedridden days, all the way up until finding the spell to cure her sickness and switching bodies with Viola. As she lay on the floor, helpless, she realises that the only reason why she switched bodies was she wanted Ellen to love and trust her as a friend, even if it meant giving up her body for a day. She also has a vision of Ellen peacefully sitting atop a mountain of human bones with her eyes closed and from that could tell her one wish - to be loved. Viola starts to forgive Ellen, a little girl who just wanted to be free and to be loved; “I could go on and die in her place… In that moment, I felt I could truly empathise with her.”

Then Ellen opened her eyes, sending a chill down Viola’s spine. Her father appeared and approached Ellen, holding out his hand for her. Ellen took Viola’s father’s hand, but she was no longer Ellen. She was Viola, with her golden braids, holding her skirt. Viola realises Ellen’s desire to be loved had been etched into her heart in a twisted form.

The smiling Ellen in her vision takes his hand and leaves the skeleton mountain, towards a bright light. Even though Viola knew she was in a vision and her voice could not reach them, Ellen turns around and notices her. When she slowly opens her mouth, Viola snaps and screams as loud as she could but only silence would emanate from her broken throat. As she kept screaming, her head filled with hate for Ellen and regret for herself. Viola thought that her body was crumbling, but instead it was just her becoming at the centre of the house - what felt like her body vanishing was the sensation of emitting magical power. As she felt the magic flowing into her, she started seeing other visions -  people dying at the hands of the house. As a man was speared by spikes, a room with a floor of spikes was created. As a child was crushed by a snake, a room with the snake was created. Viola saw more and more deaths, and like that she was recreating the house and all of its traps.

"Once the house was complete, the magic continued beyond it.” The waves of magic continued to spread, into the forest air. She made rose vines quickly weave through the trees. Before long, they reached Ellen. The forest was sealed.

Begin starts where the game starts, and is written in Ellen’s point of view. She had just switched bodies with Viola and found herself in the middle of her garden. When the black cat, who appeared next to her, talks to Ellen, she recalls all of the events that had happened in the past day and deduces that some magic was still left in Ellen’s sick body. She is mildly surprised when she finds out that Viola used the magic to trap Ellen in the garden, who was now in Viola’s healthy body which could not use magic.

As she heads to the path that lead out of the forest, she is blocked by a huge wall of red roses. They were cold and hard like metal and Ellen states that; "They could easily have sliced into my neck, but showed no signs of it’" She feels powerless, ironically in a perfectly healthy body but unable to control her surroundings like she used to.

Ellen remembers the cute little bottle that she put away in the house that could destroy the roses and let her through the exit. Having no other options, she looks back at the house and realises that she will have to go back. That Viola, who she betrayed, will be waiting for her.

The last phrase in the book, which Ellen says in the ‘true ending’ of the game, is;

It wouldn’t be killing me anytime soon."

The novel contains several black-and-white and colored illustrations made by the artist Oguchi.

The cover page and back of the novel 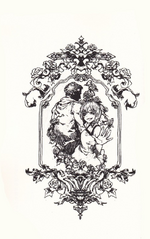 'Viola' and her father 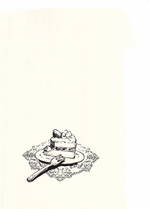 A piece of strawberry shortcake 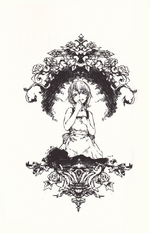 Viola standing before a bedridden Ellen. 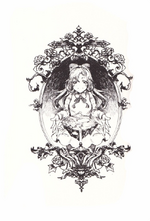 An illustration of Ellen "magic viewing" and manipulating the forest. 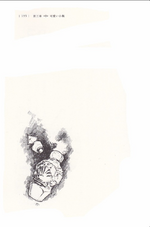 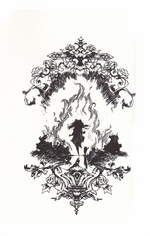 Ellen and the Black Cat escaping from her blazing home in the slums. 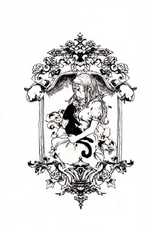 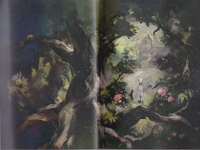 Viola following the Black Cat to the Witch's House. 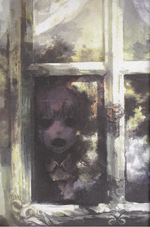 A colored illustration of an eyeless Ellen. 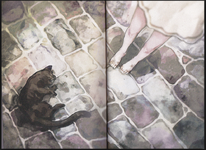