The Witch's House Wiki
Register
Don't have an account?
Sign In
Advertisement
in: Characters, Enemies, Invisible person,
and 5 more

The Cook (コックさん Kokku-san. Lit. "Cook" ) is an invisible character who is found in the kitchen.

In 'The Diary of Ellen' as well as in the concept art, the Cook is described as a big man who is easily over six and a half feet with an extraordinarily strong and muscular build. His body is fairly deformed; he lacks a head, and sports an unusually thick neck. His skin is covered with patches and stitches all over his body. He wears pitch black pants and a small dirty white apron over his frightfully large upper body.

In-game, the Cook is simply an invisible figure brandishing a butcher knife and it is possible that this is due to Ellen no longer possessing any of her witch's powers upon switching bodies with Viola as the latter herself claims that she was unable to see anyone else living in the house besides Ellen.

In 'The Diary of Ellen', the Cook is described by both Ellen and the Black Cat as a rather dull individual, lacking in intelligence and he is also quite clumsy as shown when he accidentally serves Ellen the poisonous green soup, mistaking her for the previous owner of the Witch's House and when he almost cuts her while chopping off her victims' wrists. These actions often result in him getting scolded and insulted by the masters of the house, which this fault may be due to the lack of a head.

In spite of his flaws, he is an accomplished Cook and can cook anything, but his cuisine was restricted to tea and pastries upon Ellen's arrival because the latter had little interest in eating anything else. He is a very polite and eloquent individual and extremely loyal to the Black Cat and the two Witches (Ellen and her predecessor) he served under.

The Black Cat don't seem to like the cook because of his personality and how he does what he mostly want.

According to the Black Cat, the Cook was presumably brought up to the Witch's House during the previous Witch's reign. As any human eaten by the house becomes its resident in the afterlife, it is assumed that the Cook was originally a human killed by Ellen's predecessor. In spite of his clumsiness, she showed great recognition for his cooking expertise. After the Witch had her wish to remain in the Witch's House forever granted, she became a part of the house and ended her contract with the demon. As the contract ended, the house vanished temporarily along with all of its residents (the Cook included), waiting to be reborn with the arrival of a new Witch.

Upon Ellen's arrival, the Cook makes his first appearance when he accidentally serves Ellen the poisonous soup, mistaking her for his previous mistress, only to get scolded by the Black Cat, who orders him away. Ellen was initially frightened by his massive appearance, but eventually got used to being around him. Throughout the remainder of Ellen's reign, the Cook pursued his original duty as a cook. While he was skilled at concocting any dish, Ellen would only live on tea and pastries. He was also responsible for mixing Ellen's daily medicine into the food in order to be later absorbed in her ill body. He was later shown helping Ellen cut off the wrists of her victims to collect as ingredients to make medicine, and almost cuts her out of sheer clumsiness.

When Viola came to visit, she would often pass by the kitchen to find no one, except a pot boiling on the stove. It is highly possible that the Cook was in fact present, but was invisible to Viola's eyes because she did not possess any magical powers.

Outside the kitchen door, there is a sign that says, 'COOK IS BUSY, LEND A HAND'. It will tell you that it is busy, and if you agree to help the invisible presence, it will grab your arm, put your wrist on the cutting board and (presumably) chop off your hands, which results in a game over. If you give the Cook teddy bear limbs instead, he won't hurt you and will instead reward you with a silver key.

The Cook is missing from the kitchen later when you must backtrack there. After grabbing the golden chopsticks from the skeleton room, you must put them in the pot in order to go back to the dining room. If the player does not return the chopsticks to their proper place (where they were found) or attempts to leave the kitchen with the chopsticks in their inventory, the Cook will make another appearance, this time to violently stab the player (either by running at them with a knife or throwing said blade; it is unknown which method was used because we, as Viola, cannot see the Cook). In the Witch's House MV, the Cook will cut Viola in twain.

After the player leaves the kitchen and returns to the Dining Room (the only door that will open in the Kitchen this second time through), you "hear someone coming down the stairs" and must escape to the chimney ladder before the 5 second timer hits zero. If you are still in the room when it does, the cook will come into the dining room and kill Viola.

The Cook poses more of a threat in this difficulty mode. If you give the Cook the bloody limbs, he will remark that they are filthy and will opt to take your limbs instead, triggering a chase scene. The Cook will chase Viola throughout the kitchen and the dining room hall, the only escape being through the door on the bottom-left leading to the room with the scissors.The Cook will give up chase and return to his kitchen, knocking off a few chairs and a silver platter which contains the (now maggot-ridden) odd-colored soup, but having Viola return to the kitchen then will lead to an instant game over. In order to make the Cook disappear and proceed safely to the next floor, Viola must search the toppled chairs for the Silver Key and solve the puzzle.

When revisiting the first floor and entering the Skeleton Room, Viola will find that the skeleton holding the gold chopsticks is guarded by an invisible figure. Upon interacting with it, the figure will cry out alarmingly and the Cook will be heard coming down the stairs, triggering a timer. In order to proceed safely, Viola must hide under the pile of skeletons. When doing so, the Cook will enter the room and kill the screaming figure, leaving behind the (now bloodied) skeleton with the chopsticks in its ribs. The rest of the area proceeds as usual, but the Dining Room is made more difficult to escape from.

It is unknown what happened to the Cook, but he might have simply been a part of the witch's magic that he would have disappeared when Ellen was killed. However, one theory is that he was killed even before this happened, hinted at by the presence of 'black sticky stuff' on the handle of the knife he was chopping, perhaps some form of blood or ichor. However, this theory is debunked in The Witch's House MV. 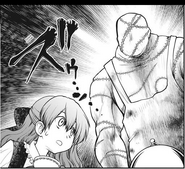 The Cook in the manga
Community content is available under CC-BY-SA unless otherwise noted.
Advertisement