Ellen's Parents are two unseen characters who is first mentioned in the first entry of the Witch's Diary, which described them as being unloving toward their daughter. According to Ellen, her father simply never displayed any love while her mother abandoned her. As such, Ellen X them, fed their souls to a demon, and afterward became a witch.

In Extra Mode, there are portraits of Ellen's parents in the Riddle Room on the 4th Floor. The note on the wall will have you answering questions that involve Ellen and how she ended up becoming a witch.

In The Diary of Ellen, Ellen's father is described to have light purple hair, similar to Ellen's hair and golden eyes. He is depicted as a violent man, as shown when he slammed open the door upon arriving home and kicked a nearby bucket upon recalling his loans. He is also noticeably foulmouthed, often muttering profanities. In addition, he is implied to be an alcoholic, as he is shown drinking in the first entry of the diary. He was also shown to be a drug addict in later entries, oftentimes buying powder, presumably the White Powder, upon his wife's disappearance.

Ever since Ellen was born, her father displayed no recognition toward her and never spoke a word to her. He is also shown to be a poverty-stricken person, as he constantly took loans and lived in the slums. According to Ellen's mother, he worked to pay off Ellen's medicine, although this information seems questionable.

When Ellen's mother abandoned her family, Ellen's father went into a state of hysteria. He refused to speak with anyone and began talking to objects. Upon being fired from his job, he continued to stay at home, still grieving for the absence of his wife. He eventually became addicted to the White Powder and came out of his room less and less.

After Ellen's father witnessed his wife's murder, he continues to ignore Ellen, despite her confessions about murdering his wife. Ellen, who had gone mad from her father's inattentiveness toward her, murdered him with her knife. He was then eaten by the demon who signed a contract with Ellen.

Ellen's father behaved in the same manner upon residing in Ellen's house. Ellen found him chained by one arm in his cell, sickly, and completely unresponsive to any stimuli. His pipe was found outside of his cell.

Upon reaching the Cellar on the 5th Floor, Viola meets Ellen's father in the right cell, who begs her for some medicine. If Viola refuses to give him the White Powder, he will spit at her or ram into the cell door.

When Viola gives him the White Powder, he becomes furious upon losing his pipe. He then rams into the door, which knocks off a nearby cage from a table as a result. After Viola gives him the Jade Pipe, he uses his medicine, but will not converse with Viola any further.

When Viola enters the right cell, she finds a discarded Jade Pipe, a pot, and a skeleton hanging on the wall. This skeleton is supposedly the remains of Ellen's father's body. The door locks upon entering the cell, and the wall with the skeleton will move toward Viola in an attempt to crush her.

It is theorized that the White Powder is opium, since Ellen's father must obtain a pipe in order to smoke it.

After Viola receives the Doll Head, upon approaching the right cell, there will be red graffiti on the door. It will read "FATHER IGNORED ME" as Ellen's father never displayed any signs of recognition toward his daughter's existence.

According to Ellen, her mother is a beautiful woman who is is described to have light brown hair and green eyes. She worked as a baker at a pastry shop and she would sometimes arrive home early to bring pastries. It was later revealed that she was not satisfied with her life dealing with her sick daughter and her husband, and later cheated with another man.

Before Ellen's mother abandoned her family, Ellen's mother was kind and considerate toward her sickly daughter. For example, she bought Ellen a doll with a dress that matched Ellen's hair; Ellen's mother also defended her daughter when a fortune teller claimed that Ellen's illness was to be blamed on the wrongdoings of her ancestors.

For most of Ellen's childhood, her mother had assisted Ellen with changing bandages and giving her medicine. Despite this, in Ellen's eyes, her mother saw her daughter as a problematic child. Ellen attempted to resolve this by staying inside the house and retaining good behavior, and her mother displayed more kindness toward her as a result. However, once Ellen wandered outside to bury a black cat, her mother began viewing Ellen as a sickly child that would become a burden. After the incident, she stopped coming home, and began cheating on her husband for a rich man.

When Ellen's mother returned home to pack her belongings, intending to leave Ellen in the custody of her father, Ellen murdered her with a knife. Her expensive white shoes then became covered with blood, which is theorized to be the Red Shoes in The Witch's House.

Upon becoming a resident in Ellen's house, Ellen's mother had transformed into a more vengeful spirit. Her cell was pitch-black, and the door was firmly shut. According to Ellen, the cell also had a sweet aroma.

The Cute Little Bottle, which contains medicine that can kill Ellen, had an aroma similar to the aroma of Ellen's mother. Ellen thus believed that her mother is the key to killing herself.

Although Ellen's mother is never seen in the game, it is theorized that she wrote various bloody messages directed toward Viola. These include "X THE FLOWERS AND YOU'LL DIE TOO," upon Viola conversing with the Yellow Flowers; as well as "HIDDEN IN THE DARKNESS," which is written after Ellen's father loses his pipe. Her message upon Viola returning the Jade Pipe to Ellen's father, "AND AFTER I HID IT SO WELL,"implies that she stole the Jade Pipe and hid it in the Dark Maze.

When Viola returns the pipe to Ellen's father, she hears someone leave their cell. Upon investigating the cell, Viola finds Red Shoes wrapped in some cloth, as well as sewing and cookware in a drawer. There is also a book written in sloppy handwriting that reads, "The ... of Making Pa...ies To a Sick Child's ... Parents ... Dependence." Upon interacting with the note in the cell, it will read, "LET THEM BLEED."

Once Viola retrieves the Red Shoes, Ellen's mother will write another bloody message, this time reading "WON'T YOU WEAR THE SHOES?" However, if Viola attempts to put on the Red Shoes, her body will be detached from her head and skip off the screen. The note will then change to, "YOU WORE THEM, YOU WORE THEM, AHAHAHAHA" upon loading the same save file.

Upon Viola retrieving the Doll Head, the left cell will have red graffiti on it. The message will read "MOTHER ABANDONED ME" as Ellen's mother attempted to abandon her family upon cheating on her husband.

Ellen's emaciated (abnormally thin or weak, especially because of illness or a lack of food) father 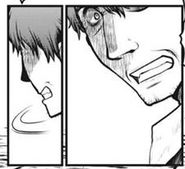 Ellen's father is the resident of the right cell 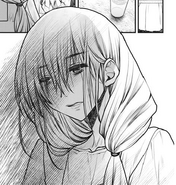 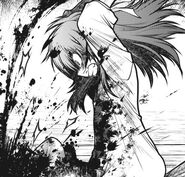 Ellen killing her mother
Add a photo to this gallery

A quick scene you see once you enter the Left Cell on the 5th Floor of Ellen who killed her Mother.
Add a photo to this gallery
Retrieved from "https://the-witchs-house.fandom.com/wiki/Ellen%27s_Parents?oldid=12826"
Community content is available under CC-BY-SA unless otherwise noted.